Directed by Ukrainian Vasyl Moskalenko, the comedy tells a grotesque story of a lab-made superhero created by the U.S. intelligence service and who has to fight evil villains to save the universe.

To accomplish this mission, however, the superhero doesn’t need to leave the filming studio in Kyiv. All grand battles of the fictional character happen on 400-square-meter LED screens wrapped around the studio walls. The screens display any background Moskalenko chooses — whether it is a space station or a street in New York.

Moskalenko is a pioneer in the Ukrainian cinema industry as no one has ever made a movie with virtual reality technology here.

Globally, Hollywood giant The Walt Disney Company has already used virtual reality to produce the movie “The Lion King” and series “The Mandalorian.”

But Moskalenko said Ukrainians went a step further — they “taught” a robot how to work with a virtual space without the help of a camera operator and used LED screens that give more detailed images.

This technology is a breakthrough for Ukraine’s cinema which makes it faster, more flexible and cheaper for local directors to produce movies.

“(Ukraine) can make movies of any scale. And I want ‘Apple Man’ to be a project that proves that,” Moskalenko told the Kyiv Post.

Usually, to make a feature movie with eye-catching visual effects, directors use a green screen (chroma key) which is a backdrop of vivid green or blue that is replaced with animated images or videos during post-production.

Moskalenko said that LED screens are better because camera operators and actors can interact with the world they see.

Apart from that, virtual production is faster, he says. In one day Moskalenko can “visit” dozens of locations for shooting a film that, otherwise, would take months to do.

He can even change virtual decorations in real-time — switch the traffic lights, modernize old buildings, or increase the size of trees on the street.

LED technology is still in its infancy in the cinema world, but it is gaining momentum as tools for virtual production become cheaper and more advanced, according to Andriy Vasylenko, the founder of One Location film studio that introduced LED screens to Ukraine’s cinema.

Vasylenko’s studio is the biggest of its kind in East-Central Europe — and the only in Ukraine. Opened just a few months ago, it has already worked with Ukraine’s biggest TV channels like 1+1 and companies like automotive manufacturer Toyota.

The studio looks like a stage with LED screens everywhere. Actors perform on the stage while screens display complex and exotic digital backdrops in real-time.

According to Vasylenko, Ukrainians work with the Unreal Engine platform for animated storytelling created by U.S. company Epic Games. Since 2015, it offers its technology for free.

The Walt Disney Company used the same platform to make “The Jungle Book,” “The Lion King” and “The Mandalorian” movies. But, according to Vasylenko, Ukrainian specialists were the first who connected virtual background to the cinema robot Bolt, one of the fastest in the world.

Brought to Ukraine by the Ukrainian To Be Production studio, Bolt is now the only high-speed camera robot here. Globally, it was used to produce popular movies like “John Wick,” “Kingsman,” and “Doctor Strange.”

A three-and-a-half-meter-high robot holds a camera in a robotic arm and moves at a pace of up to five meters per second. Bolt can follow falling objects and capture images that humans cannot, said Dionis Akulov, the cofounder of the To Be Production studio.

For Ukraine, Bolt costs a fortune, Akulov told the Kyiv Post. He did not specify the price, but, according to cinema robotics manufacturer Mark Roberts Motion Control, Bolts’ average price is around $275,000.

Akulov said the investment pays off because the robot allows the local film industry to work with all kinds of projects.

Moskalenko said that Ukrainians now use the same technology as famous film companies in Hollywood. However, the story of his “Apple Man” began long before Moskalenko embarked on a tech-driven feature movie. 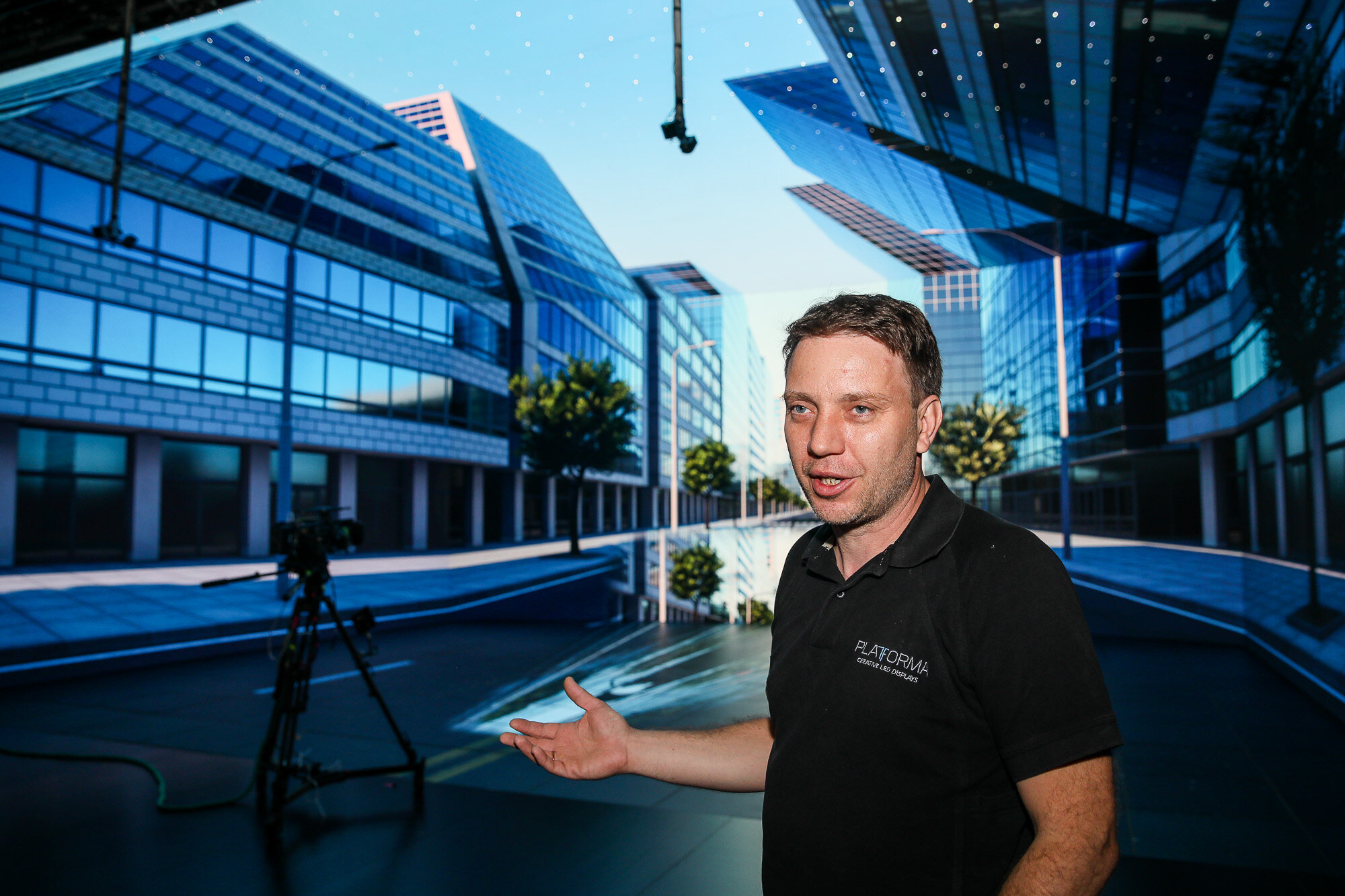 The founder of Ukraine’s One Location film studio Andriy Vasylenko poses for a photo in front of the LED screens that display a virtual background that is used to make movies and commercials. 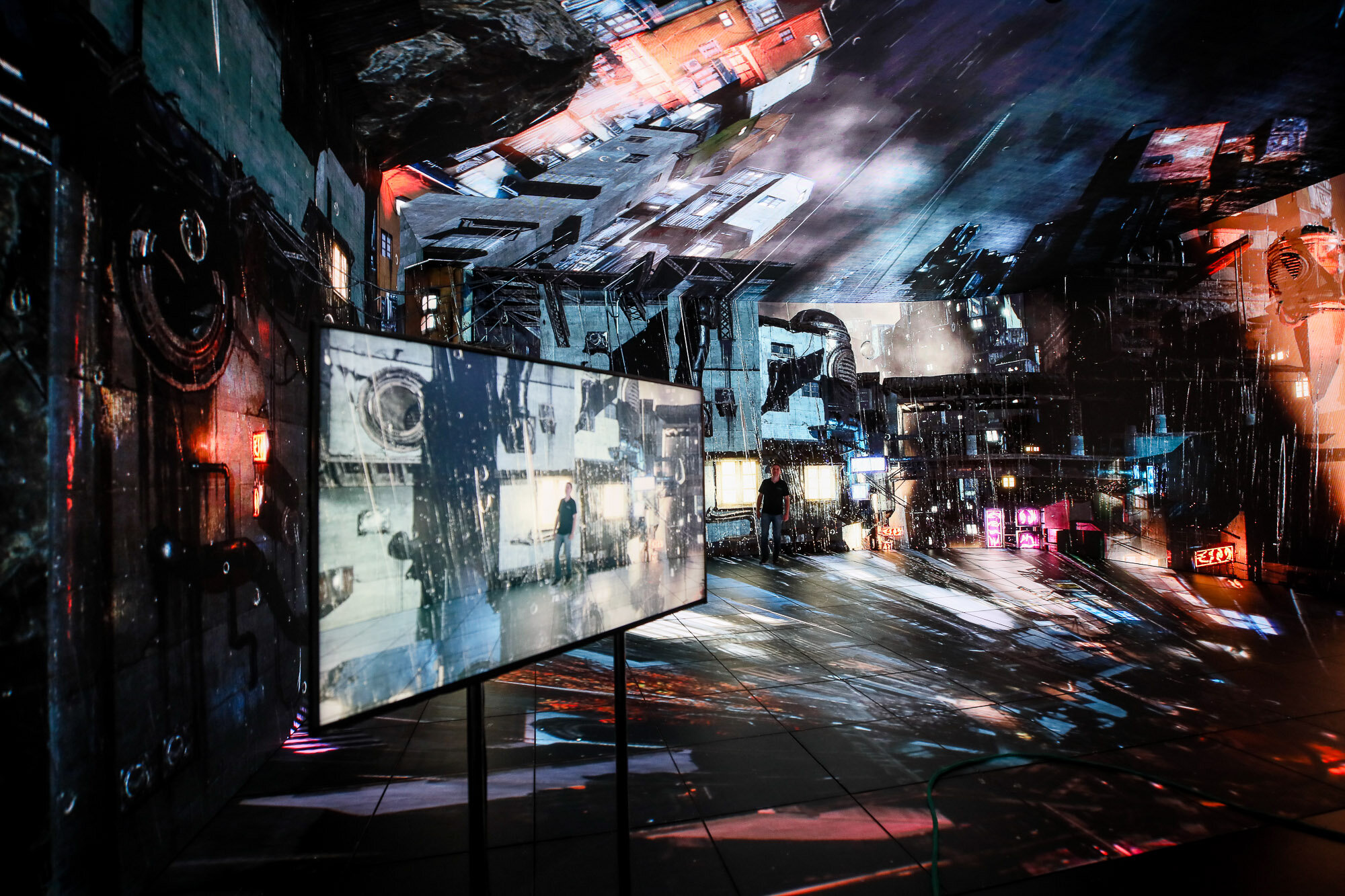 One Location is Ukraine’s only film studio that uses virtual reality tech to produce movies and commercials. The 400-square-meter LED screens display eye-catching and exotic backgrounds that can be changed in real-time. 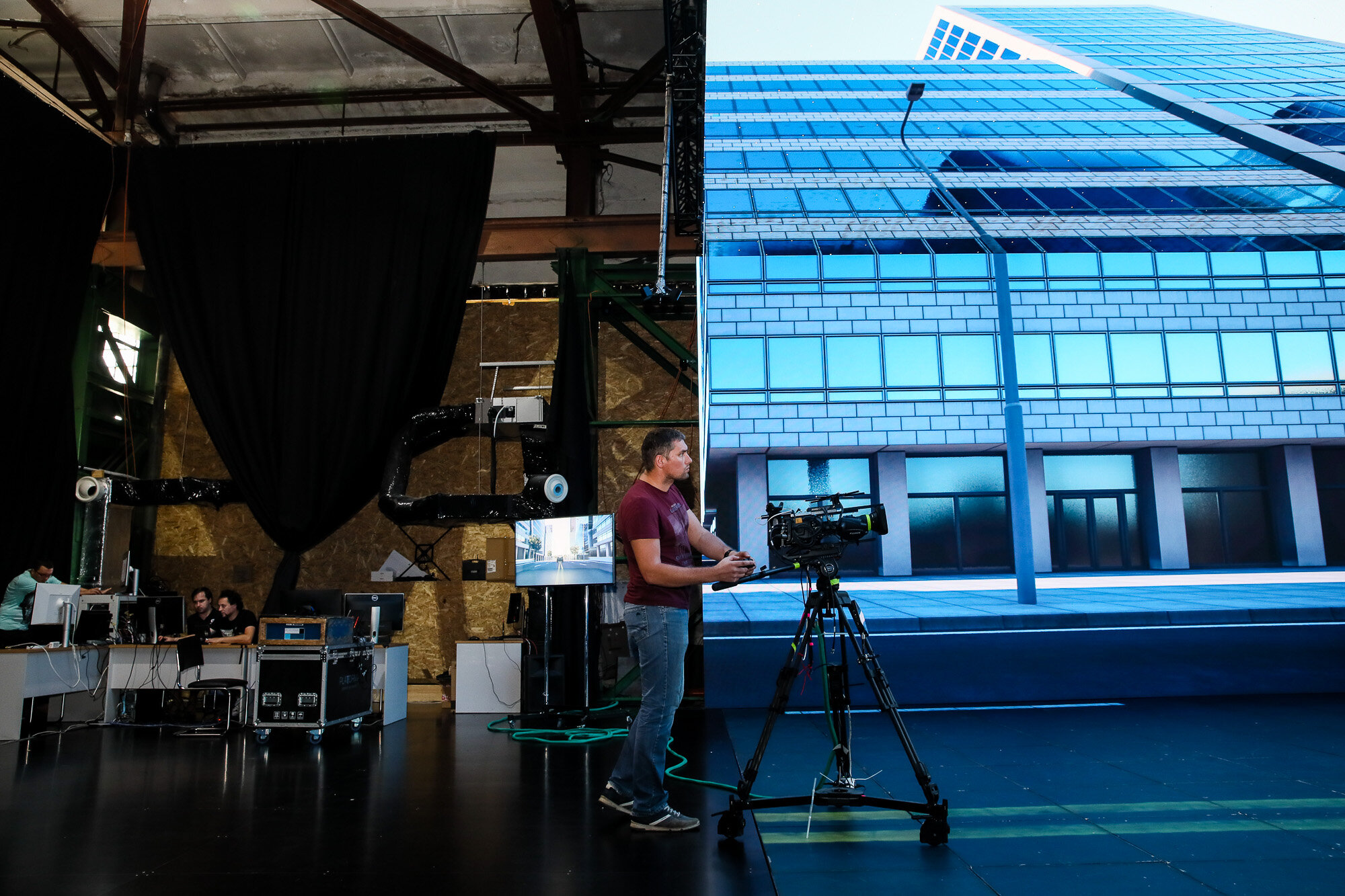 Tech specialist of Ukraine’s One Location film studio in Kyiv tests the work of LED screens on Aug. 11. The studio looks like a stage with LED screens wrapped around the walls. Actors perform on the stage while screens display complex and exotic digital backdrops in real-time. 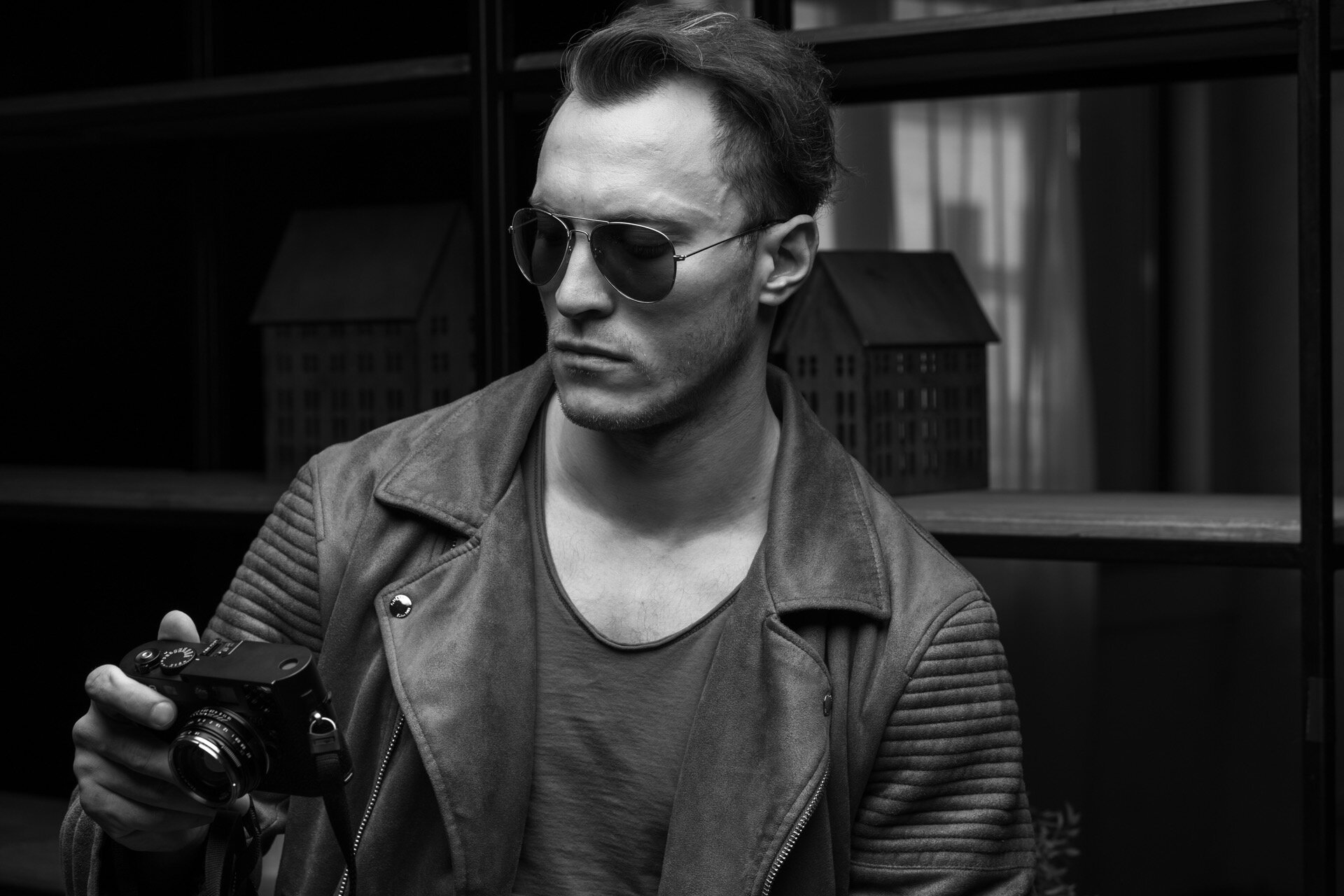 Vasyl Moskalenko is the director of “Apple Man,” the first-ever movie shot in Ukraine with a high-speed camera robot and flexible LED screens.

The invented hero first appeared in the 44-minute length film that Moskalenko shot in his Kyiv’s apartment amid the COVID-19 quarantine.

The coronavirus lockdown has taken its toll on the film industry: movie theaters were closed and film production suspended. But Moskalenko thought that he could make a movie in his fifteen-square-meter bedroom without going against quarantine restrictions.

“My idea was to make a movie about a team of superheroes associated with different food products,” Moskalenko said.

Among his movie characters are Doctor Burger-man, Professor Sausage, and Chocolate Cookie Villain.

“Apple-Man” looks like a parody of U.S. Marvel superhero films, but Moskalenko said that his movie is rather a tribute to the popular superhero sagas.

And people liked his story, especially in the U.S.

Moskalenko’s movie trailer featured on U.S. media channels such as Fox, NBC, and ABC. And actress Jennifer Aniston, known for her role in the sitcom television series “Fiends,” liked the Ukraine-made movie on Instagram.

“I was absolutely surprised when the U.S. audience liked the movie,” Moskalenko said.

According to him, it is hard for a Ukrainian director to make a movie that will please the English-speaking viewers.

“I received hundreds of emails from around the world asking if I would make a feature movie,” Moskalenko said.

Ukraine-made comedy film “Apple Man” directed by Vasyl Moskalenko depicts a grotesque story of a lab-made superhero created by the U.S. intelligence service and who has to fight evil villains to save the universe.

So he decided to turn it into a 90-minute feature film to show Ukraine’s potential in the world.

Over the past few years Ukraine has been gaining popularity among renowned directors, actors, and producers of commercials and music videos as a destination for shooting videos. For example, musicians like Miley Cyrus, Tom Misch, and Coldplay all had their music videos shot in Kyiv.

Filmmakers usually come to Ukraine to scout locations due to the country’s exotic post-Soviet architecture and low production costs.

“It will cost five-six times more to rent a studio like ours in California,” Vasylenko said.

But apart from low prices, Ukraine’s cinematography also has huge technological potential and a pool of qualified specialists.

“Many do not realize that post-production for Hollywood blockbusters is often done in Kyiv, Dnipro, or Kharkiv,” Moskalenko said.

For example, the Kyiv-based Radioaktive Film production studio has worked with U.S. television network HBO to produce the appraised series “Chernobyl,” as well as with Ukraine-born company Filmotechnic that develops filmmaking equipment, and is praised by Hollywood film directors.

Vasylenko is sure Ukraine is at the forefront of filmmaking, even though few know that.

“Ukraine often introduces the technology that is later used all over the world,” Vasylenko said.

View all posts by alejandro →